skip to main | skip to sidebar

We had a party at Paul and Sherry's house for the television debut. It's too bad they can't do a follow up now; the garden is absolutely gorgeous during spring. Perhaps I can finagle some pictures later on.
Posted by Ingrid at 2:04 PM No comments:

Much needed update of our backyard

Much needed update in backyard makeover and I wished I had the time to shrink these pics but I do not, bear with the upload. 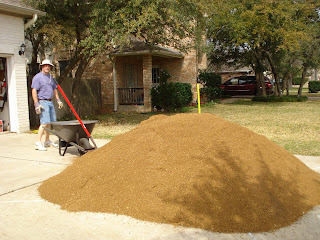 A heapin' of crushed granite 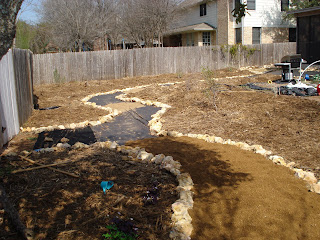 the winding path (of crushed granite) 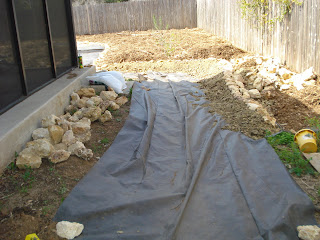 working on the side entrance path 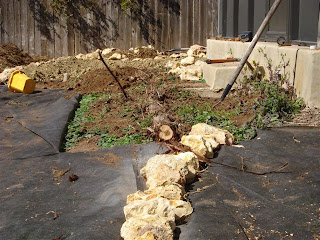 leveling in front of back porch 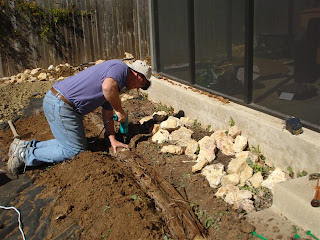 cedar logs multi-use, this time, for leveling and making a strip veggie garden, it's a try-out 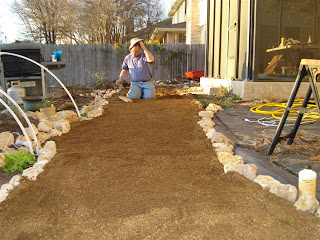 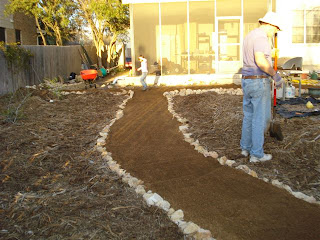 back porch from different angle. Path not tamped down yet. 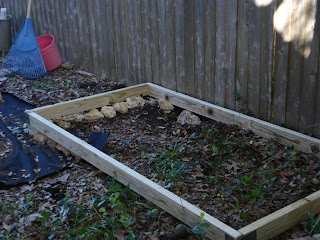 side entry, building a spot for the recycle and garbage bins 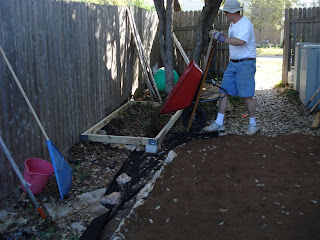 note the side entry can be seen and things on the side are leveled off as well.

More garden pics later of the thing as a whole. Have to space out my planting this week. It's a loong process, especially when you do everything yourself.
cross posted at Austin Permie
Posted by Ingrid at 2:02 PM No comments: 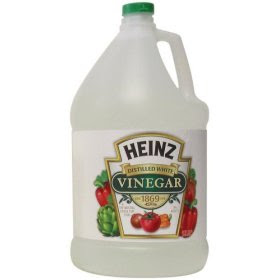 Even though I and many others like the idea of going completely organic, I myself have not had much luck with that. It seems that, weeds just take over no matter what. Now one of my fellow twitter and blogger and Austinite mentioned the possibility of using vinegar. She suggested to google it and I did.

This is what I found;

"Currently, research is being conducted at Beltsville, Maryland, at the USDA site to determine the efficacy of vinegar for controlling weeds. I conversed via email with John R. Teasdale in Beltsville, who very kindly sent me the URL of a Web site where we can all keep abreast of the latest developments in this field. 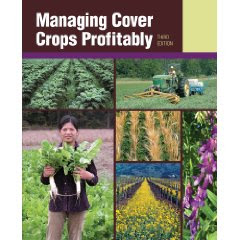 
I also talked with local Cooperative Extension specialists at both the U of I and WSU to determine if there was any research being conducted locally into this exciting development. Carol Miles, from WSU Vancouver, said that WSU is unable to recommend something as an herbicide unless it has herbicide information on the label–which vinegar does not–plus she hadn't seen this research yet. She did, however, recommend Scythe, an all-organic herbicide, as something organic gardeners could use, as well as using plastic with mulch (irrigating under the plastic). Tim Prather, from UI, is conversant with this new research and recommended that whoever starts using vinegar in an organic garden needs to be aware of the source of the vinegar. Otherwise, the organic certification could be compromised. He said that research is being conducted in California using vinegar and he's the one who recommended contacting John Teasdale, a long-time researcher in sustainable issues. He also said that you could use a surfactant, such as Ivory soap, to increase coverage ability of vinegar"

Read the whole story and click on the link ("this is what I found").

So I guess I ought to give it a try even if the article does not discuss the smorgasbord of weeds that are in my backyard. I'll see what I can do this weekend, rain notwithstanding. The smaller weeds with 3 to 4 leaves were considered the most effected, mine are so tall and bloomin'(g)..sigh..we'll see.

Weeds, the never ending story.
Posted by Ingrid at 4:49 PM No comments:

Being on Twitter and also being selective on whom I follow (marketers can follow me all they want, I'm not following them), I've met some interesting people. One of them actually owns a nursery in North Carolina. Kevin Campbell from the Campbell Family Nursery operates one of the native nurseries in North Carolina like we have here in Austin with the Natural Gardener and Barton Springs Nursery.

So hat tip to Kevin for sending me this one; Eat the Weeds by Green Deane

As everyone else does; only try things out accompanied by a professional. I myself would not trust to figure out which bush or berry is which. One wrong bite ..and you're compost material!

On another note; what a way to surrepticiously plant a community garden! Hmmm
Posted by Ingrid at 9:59 AM No comments:

Sculptures at the Wildflower Center 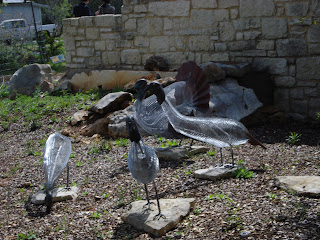 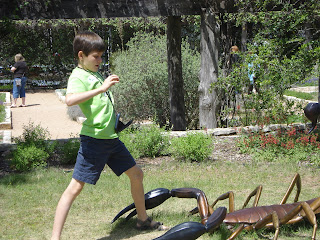 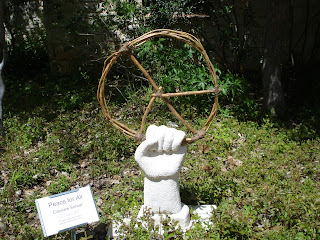 If only I had paid more attention to the names.. 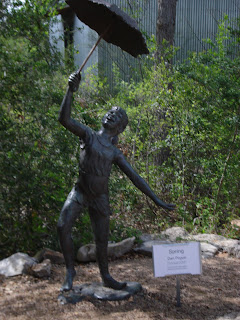 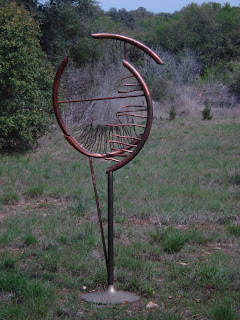 Now THIS I'd want in my backyard 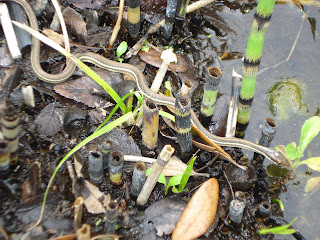 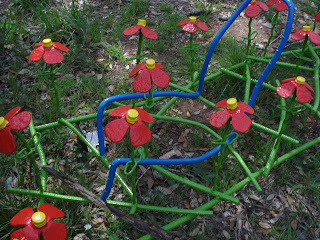 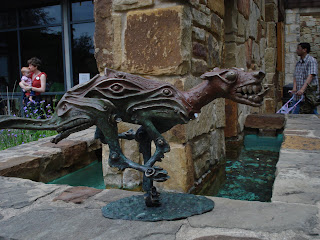 For more sculptures and to just plain enjoy them at the Wildflower Center which I highly recommend; the exhibit is open until May 31st. Click on title for more info.
Posted by Ingrid at 1:12 PM 2 comments: 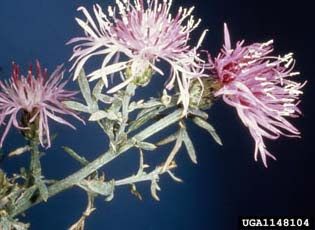 For those who, like me in the past, think, psah, what does it matter if I bring some seeds from another country? Well, invasive species, aliens to our ecology, come in and not only take over, but destroy an ecosystem that is so linked to other ecosystems. 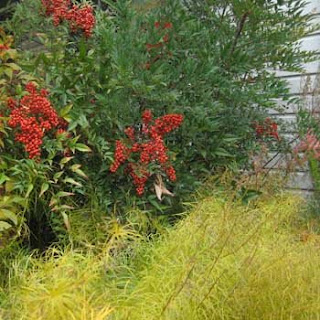 
Like the berried Nandina that people have in their yards here in Western Oaks, if it doesn't spread by wind or rhizomes, the birds will eat the seeds and plop them where ever the soil will takes and voila, the spreading has continued. Learning about invasives and why they should be plain forbidden is a long study on its own. For now, perhaps whilst browsing or looking through your 'Grow Green Guide' from Austin, read up some more at the gov site of "National Invasive Species Information Center".

Try to go native at all times for your own specific area. There are a lot of South African plants that seem to do well here in Central Texas, just make sure that, where ever the plant is from, it is not invasive. You'll do your part in protecting our ecosystem with beneficial insects, protect from soil erosion and poisoning other plants. That one would be courtesy of the Knapweed plant. A European native that somehow made its way here probably through the trade of some other food item. Check out the link for some of our area's problem plants and make sure you do not have any.
Posted by Ingrid at 8:42 AM No comments: 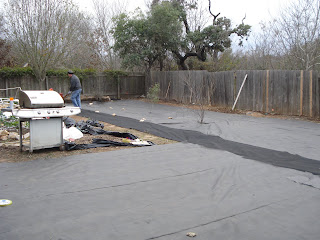 
I have my own gardening blog where I posted pictures of our big, backyard makeover. We did the unmentionable of putting down landscape fabric, covering it with loads of mulch and outlining a path with rocks gotten at one of the local cemetaries. This afternoon, James (husband) went out and got more rocks but bigger ones for the side entry. The idea is to level it with filler sand. I'll try to take pictures of it as we go along. 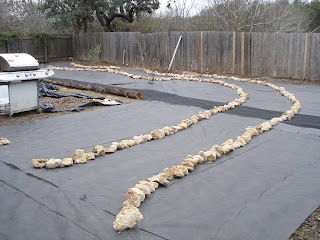 A path runneth through it!

This past week, inspite of having two kids home with the flu, I managed to go outside at the end of the week, hauling off the younger one who was waay too active (but still not sure about her 'flu-status') so she helped me with digging (more like scraping) into our caleechy soil and added and mixed in some compost for some of the plants we planted; oxalysis, times 5, a bush white honeysuckle and two silver gray sennas. They're all pretty small at this point but hopefully this summer I can start showing some growing progress. 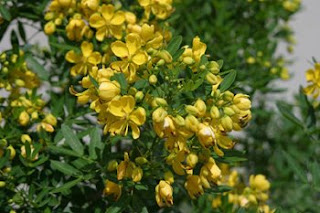 although they're small, I planted two flowering sennas


Tomorrow I'll get some worms to add in those areas where I planted in order to add with the soil and the plants' establishment; aerating the soil and fertilizing it in the process! Thank you Craigslist! James put in an add this morning asking for worms and this guy off of North Lamar responded, he apparently has a whole vermiculture set up and set-ups for sale as well. That's the next thing. For now, we're still doing our own makeover and like so many things; we're in it for the long haul!

So last year's Mother's day I got; two possum haw hollies; one mexican plum; one desert willow and one Texas persimmon. Now this year the shrubs and hopefully some more groundcover. After all, it's hard to stop with 'just these'. Pictures to be followed. 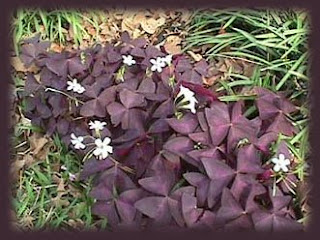 Purple leaf oxalis. Good for the shady area in your garden.

Ingrid
Posted by Ingrid at 9:37 PM No comments:

What percentage of natives do you have in your yard, front and/or back? 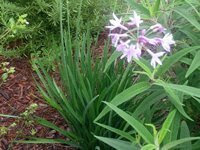